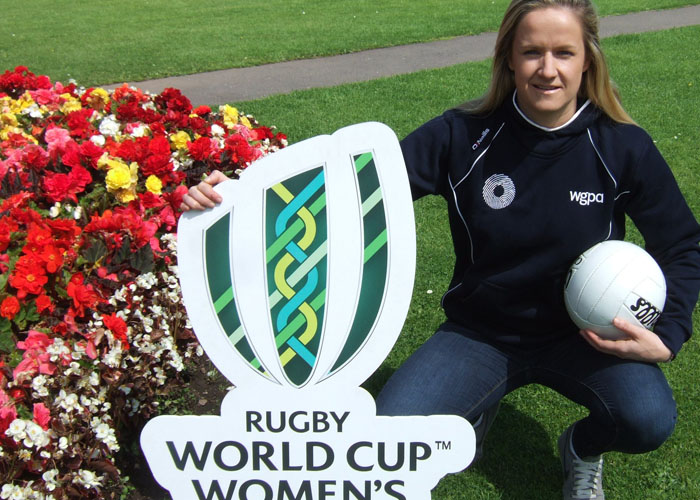 Sports may be competing with each other for players, resources and the public’s interest but the Women’s Gaelic Players Association’s Ulster figurehead Gemma Begley is an enthusiastic supporter of the women’s rugby World Cup being held on Irish soil this month.
The tournament takes place in Dublin and Belfast over the next few weeks with hosts Ireland’s matches all being televised live on RTE as well as ITV4, so the event is set to generate considerable exposure for the increasingly popular oval ball code.
However, rather than appearing paranoid about any perceived threat, Tyrone ladies gaelic legend Gemma takes the more enlightened view that a rising tide will float all boats and anything that helps elevate the status and visibility of female sport should be embraced as a good thing.

“I’m definitely looking forward to this World Cup and, as an Irish sportswoman myself, getting behind the national team as they try to build upon their heroics last time when they beat New Zealand,” she says.
“New Zealand hadn’t been beaten at a World Cup for something like 23 years and at that stage the Ireland men had never won against the All Blacks or reached the semi-finals at a World Cup so it was an historic achievement by the women’s side.”

“There’s real interest in this women’s rugby World Cup, what with the Irish success last time and the fact that this tournament is being held here but I don’t see it as having any negative impact on ladies football or camogie.”

“Men’s rugby went professional more than two decades ago but it didn’t damage the GAA as some maybe feared at the time and it’s the same now with women’s rugby even though it offers that international dimension or professional contracts for the sevens version.”

“You’ll always get indivduals doing something different or finding an alternative attractive, be that the Aussie Rules or rugby or whatever, and or course quite a few females especially play more than one sport,” reflects Gemma, whose successor as Tyrone captain Neamh Woods doubles up as a current Northern Ireland netball international.
Gaelic football has always satisfied Carrickmore markswoman Begley’s sporting passion and of course the All Star and her Red Hand colleagues played in front of a bigger crowd in that 2010 All Ireland final than will attend the women’s rugby World Cup final at Belfast’s Kingspan Stadium on August 26.

As someone whose present professional role is to improve the lot of elite ladies gaelic footballers through her work with the WGPA, Gemma is happy to report that the state of her own sport has never been healthier though the drive for continuous improvement continues.
“Ladies football has come a long way since I started with Tyrone 14 seasons ago, especially the physical preparation, and the Irish government grants now mean county teams can avail of professional strength and conditioning and performance analysis services.”

She hopes that the high-profile exposure which this women’s rugby World Cup gets over the next few weeks will prove a valuable endorsement for female sport as a whole and help persaude parents, especially fathers, to encourage and support their daughters going forward.
“The double headers in the gaelic have been beneficial for ladies football by getting our games seen by more people who had only watched men’s matches before and hopefully the fact that these Ireland rugby games are being televised live at an ideal time of the evenings will have a similar effect.

“Women’s sport has had a great shop window already this summer with the women’s cricket World Cup final filling Lords and the European Championships soccer with this rugby World Cup to come and the biggest games televised in the All Ireland ladies football and camogie.
“Having high-profile platforms for an appealing product can only help persuade sponsors to regard female sport as a attractive investment proposition and generate more media coverage.”
The fact that some of the Irish rugby team’s top players including captain Claire Molloy, outhalf Nora Stapleton, prop Lindsay Peat, winger Eimear Considine and full back Mairead Coyne have all played gaelic games at inter-county level naturally adds interest for Begley.
“Lindsay Peat played for Dublin against Tyrone in that 2010 All Ireland final and the same day two of that summer’s Ireland rugby World Cup squad, Nora Stapleton and Niamh Briggs, were on opposing sides for Donegal and Waterford in the Intermediate final so there are real links.”
Full back Briggs was due to captain Ireland at this tournament but had to withdraw with an achilles injury nine days before this Wednesday’s opening group game against Australia at the UCD Bowl (7pm).
The girls in green face emerging Japan on Sunday (5.15pm) and then the formidable French next Thursday (7.45pm) at the same venue with all three matches already sold out several weeks ago.

With only one runner-up across the three groups getting through to the semi-finals Ireland will almost certainly need to win all three first phase matches and top their Pool to remain in contention for the trophy when the tournament moves to Belfast for its second phase.
However with teams playing on for a specific placing rather than being knocked out, all 12 sides will play two rounds of fixtures up here with both Ireland games guaranteed to be at Kingspan Stadium regardless of which pot they find themselves in based on first phase results.
There are still tickets available for semi-finals day (Aug 22) and the World Cup final, which will take place at Kingspan Stadium on the last Saturday of this month with holders England or New Zealand expected to be lifting the trophy.

RT @sportireland: The need to make friends in a new town after relocating for work, as well as wanting to learn to swim led Kate to triathl…...