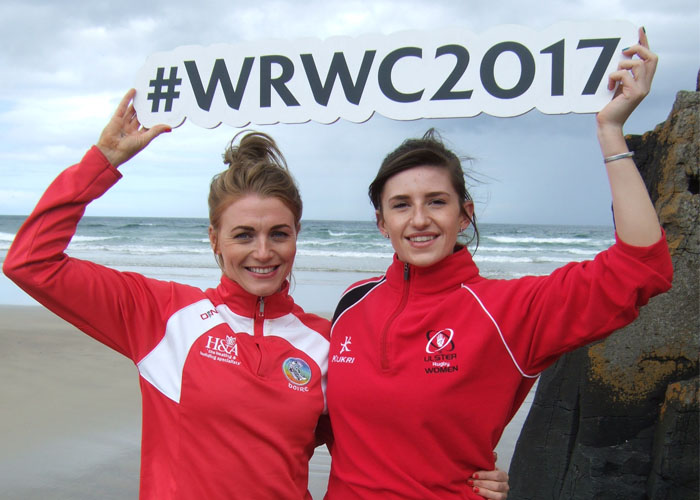 Local camogie legend Grainne McGoldrick is hoping that this month’s women’s rugby World Cup being held on Irish soil will prove a positive shop window which inspiringly showcases the merit and appeal of female sport in this country.

Centre Claire McLaughlin from Bushmills, a doctor at the Mater Hospital who lines out for Belfast club Cooke, is one of two Ulster players in a 28-strong squad for hosts Ireland, whose opening game in a group also featuring France and Japan is against Australia this Wednesday at the UCD Bowl (7pm).

The tournament’s first phase takes place in Dublin before switching to Belfast for the business end, with the final scheduled to take place at Ravenhill’s Kingspan Stadium on August 26 and respected Portstewart sportswoman McGoldrick can’t wait for the action to get underway.

“As someone who hasn’t a women’s rugby background but greatly admires what this Irish side has achieved over recent years, I’m really looking forward to this tournament and the fact it’s taking place on our own doorstep is very exciting, especially for the players themselves,” she enthuses.
It will be a once-in-a-lifetime experience for the Irish girls, playing a World Cup on home soil, and the exposure which comes with that is something they richly deserve due to the outstanding success they have had and the exceptional commitment they give to their sport.

“They’re effectively living like professional athletes but, because they’re actually amateur, they have to hold down full-time jobs alongside their rugby and also try to find some time for family life and so forth, so they’ve made a lot of sacrifices to get to where they are.”

As a distinguished sportswoman herself who had 16 seasons with Derry camogs before serious injury intervened to effectively end her distinguished inter-county career, McGoldrick knows well the effort, time and dreams the Ireland rugby women have invested along the way.

“I think the players got a few weeks off after the Six Nations but it has been a long build-up period since April for them.  They’ve had a punishing schedule but nobody would want to leave any stone unturned and it’s no surprise people are saying that is the best prepared Irish women’s side ever going into a World Cup.”
It doesn’t get any bigger than this, having the World Cup in your own country and going in with justifiable aspirations to do very well after finishing fourth last time and beating what previously seemed an invincible New Zealand team at that tournament in France (2014).

“They’ve also won two Six Nations titles either side of that, including doing the historic Grand Slam of 2013, so with home advantage at this World Cup, Ireland will be regarded as realistic contenders although (fully professional) England and New Zealand appear very strong.”

A few years ago when McGoldrick was shortlisted for Northern Ireland Sportswoman of the Year she was edged out by a collective award to the Ulster representatives from that Irish Grand Slam side and says she remembers being ‘in total awe of their physique’.

“I’ve kept an eye on their matches since then but this World Cup being held here will give the Ireland women’s team a much higher-profile platform and greater audience, not just in terms of fans attending the matches but also casual sports lovers watching on television.”

“The fact that it’s on terrestrial television rather than satellite (RTE will broadcast every Ireland game live) makes it more accessible as does the fact the Ireland matches take place in the evenings.
“We’re used to having to get up through the night or whatever to watch big global sports events taking place in different time zones but, over the next few weeks, people can come in from a day’s work and sit down and watch the Ireland women’s rugby team playing in a World Cup.”

She hopes the curious, casual audience will like what they see in terms of Irish success and compelling, high-class contests which provide a vibrant validation of females as a viable, valued element of the sporting spectrum at elite level.

“There was a capacity crowd at Lords for last month’s women’s cricket World Cup final, the women’s European Championships soccer has been on the television lately and of course ladies gaelic football and camogie attract great attendances to their respective finals day at Croke Park, so sportswoman are starting to become more visible at the elite level.” To McGoldrick’s delight, her Eoghan Rua clubmate Katie Mullan last month captained the Ireland women’s hockey team to the brink of qualification for the World Cup and she hopes another north coast woman, McLaughlin, will play her part in Irish rugby glory in August. “Seeing Katie profiled in national newspapers is a source of pride and now we’re starting to get the rugby World Cup previews with interesting features on the players including Claire.  Hopefully the tournament will get great coverage, especially if Ireland do well again.”

“Women’s sport can be just as good a spectacle and exciting as men’s sport – I’m sure people will be blown away by the levels of fitness, physicality and skill at this World Cup – but it needs the platform and the coverage and the public backing it.”

“I feel that as sportswomen we should be actively supporting each other in helping promote all the different codes because collectively it benefits female sport as a whole,” urged Grainne, who last week joined local Ulster rugby player Sapphire Dudley in a World Cup-promoting photoshoot with the north coast providing a stunning backdrop.

“I think there’s genuine interest in this World Cup across the female sporting spectrum and although Ireland’s group games are sold out, it would be great to see the girls really pack out Kingspan particularly if they qualify for the semi-final of the main competition.

“We’ve seen with the likes of the Ireland cricketers or the two soccer sides how the country gets behind a winning national team and I’d like to think it would be the same with the rugby girls if they can repeat the heroics of the last World Cup (when finishing fourth).”

Representing Derry in gaelic games meant every bit as much to camogie All Star Grainne and younger sister Meabh as it did to their footballing brothers and the dedicated commitment was no less on the female front.

Captaining her county to victory in an Ulster final on Derry turf in 2013 was a highlight of Grainne’s long and successful inter-county career so she can certainly imagine how “it must be an absolute dream for each and every one of this Irish squad to have the opportunity to play in a home World Cup.”
Having played big games in Croke Park, McGoldrick knows the buzz a significant crowd can generate and also appreciates the effect partisan support can have on a home team.

She hopes enthusiastic crowds really lift the host nation, inspire players to fresh heights and give Ireland the extra edge which could make all the difference in a close contest.

“It’ll be fascinating to watch the Ireland team try to convert all their hard work and meticulous pre-tournament preparation into delivering top performances when it matters most and I’ve no doubt that the packed home crowds can really help them when the going gets tough.”

Ireland’s dream of actually lifting the trophy has suffered a big blow with inspirational skipper and arguably top player Niamh Briggs being ruled out of the entire tournament by injury just nine days before the opening game.
Losing the talismanic Briggs could prove very costly for Ireland but first and foremost the typically compassionate McGoldrick’s thoughts are with the Waterford woman who has suffered such cruel luck.
“It’s just heartbreaking for Niamh, having fought back from a bad hamstring tear (which had kept her out for many months) to get fit for the World Cup and then to have the chance of captaining Ireland in it on home soil snatched away with a new injury at the last minute.

“I can only imagine how she’ll be feeling now,” commiserates McGoldrick, who knows all about injury nightmares and dreadful frustration having been unable to line out for the Derry for the past three seasons after her knee was shattered in the 2014 Ulster club final.
With only one runner-up joining the three Pool winners in the semi-finals of the 12-nation tournament, it is unlikely that more than one team will get through from Ireland’s group which contains three of the top six sides in the world rankings.

Ireland’s opening opponents, sixth ranked Australia, are battle-hardened from facing neighbours New Zealand, England and the third women’s rugby super-power Canada in June and are bolstered by some of their sevens gold medallists from the Rio Olympics.
Like their men’s side, the Japanese women are an emerging force while the then hosts France defeated Ireland in the third place play-off at the 2014 World Cup, though they were beaten 13-10 by the girls in green in the Six Nations clash in Dublin earlier this year.
A punishing schedule of five matches in 17 days will see Ireland face Australia tomorrow (Wed), Japan on Sunday (5.15pm) and France next Thursday (7.45pm) before their placings games in Belfast on the Tuesday and Saturday of the following week.

The entire tournament will be televised live by eirsport and ITV4 with all the Ireland matches being broadcast on RTE2.  Tickets for the World Cup semi-finals and final at Kingspan Stadium are still available.