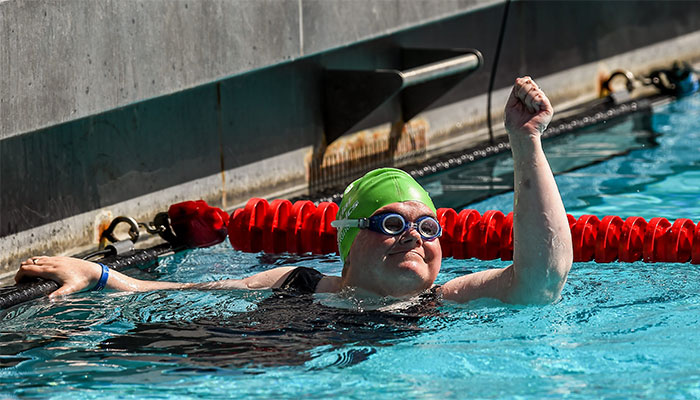 "Find something you love and go after it... If I can do it then so can you."

1. What first inspired you to take up swimming?

I’ve always been involved in sports and when I was attending school, swimming was my favourite. When school finished and I began attending a day centre it just became a recreational activity with family until I met a woman named Valerie Davison who is the founder of Ripples Special Olympics Sports Club. She invited me along to one of their swimming sessions and I loved it. Everyone was friendly and welcoming and I had a great time in the pool. I began going every week and met lots of new people who I still know today. That was nearly 20 years ago and I am still swimming twice a week and competing in competitions for Special Olympics Ireland.

2. Did friends, family or coaches play a factor in taking up swimming?

The support network within the Special Olympics is second-to-none and has played a big part in getting me to where I am today. Our coaches always make sure we are having fun. They provide us with a great environment to learn and always adapt to our abilities. I’m deaf so I can’t hear the starting beeps in competitions so one of them is always there to start me off in time with the other swimmers. My family are very supportive in everything I do. They drive me to training and cheer me on at competitions. Having all of these great people to support me makes it easy to enjoy. As well as swimming I play ten pin bowling – another game I love – and have won medals in both sports.

3. Were you nervous when you first started?

I can’t remember being nervous when I began but if I was my nerves disappeared fast. Everyone at the club is kind and friendly and happy to help out if you need assistance. Any nerves are quashed at the door!

4. Was there a point at which your interest in swimming began to grow, in terms of pursing this as your main sport?

In 2003 I volunteered at the Special Olympics World Summer Games in Dublin. It was the first time the games were held outside of the United States and nothing like anything I’d ever been to before. I attended the opening and closing ceremonies and helped to sell merchandise as a volunteer. I went to see several different sports and witnessed athletes from all over the world with different abilities compete and win medals. The atmosphere was amazing and everyone was having fun. I had already won medals in other competitions but nothing on the scale of these Summer Games. It inspired me to take swimming more seriously and gave me a goal of one day standing on the podium at a World Games and holding my medal. I achieved that goal in the summer of 2015 in Los Angeles with 2 bronze medals!

5. What are some of your main sporting achievements to date?

In June 2014 I competed in the All Ireland Games in Limerick and won a gold medal in 100m backstroke. It was this medal that qualified me for the World Games the following year. I won 2 bronze medals in Los Angeles at the Special Olympics World Games in July 2015. I also managed to set a new personal best time in the 100m backstroke during these games.

6. How did it feel to achieve Team Ireland’s first medal in Los Angeles at the 2015 Special Olympics World Summer Games?

I was so happy when I won my first medal in Los Angeles. It was the first day of competitions and when I found out it was the first medal for all of Team Ireland, it made it extra-special. Everyone was congratulating me and I was interviewed by television and radio and had my picture taken by the pool. Two of my swimming teammates also won medals that day, which was a great start for Team Ireland. Having one medal in my hand spurred me on in my next race and I won another bronze. All of my training had paid off and I finally got to stand on the podium at the World Games – twice!

7. What are the three best things about being a sportsperson?

– Playing sports keeps me active and fit and provides opportunities for people like me to get out of the house.

– I’ve met so many great people through the years and as I have continued to swim and bowl I have met so many more. It’s great for socialising and making friends who share your interest in sports.

– Since I joined Ripples and began competing I have been lucky to travel and see new places I never would have before, including America.

8. What advice would you provide to other women and girls considering taking up sport?

If you think you are limited by your disabilities you are wrong. There are so many great clubs and opportunities for everybody of all abilities. Find something you love and go after it. I love to swim and play ten pin bowling and thanks to Ripples and Special Olympics I’ve been able to do both. I’ve also won medals in both sports including a gold and silver for bowling in February this year. I’m deaf, partially sighted and have learning difficulties, but thanks to family, friends, Ripples and Special Olympics I’ve never felt discouraged from pursuing my favourite sports. If I can do it then so can you.

RT @NISportsForum: We are fortunate to have many great sport ambassadors in Northern Ireland and it was great to see some getting acknowled…...

Australian born swimmer excited to compete for Team NI in Birmingham in the summer. Check out her story 👇🏼 https://t.co/CcwhBQYk0i...

RT @NISportsForum: This is #PrideMonth and we are celebrating the diversity and contributions the LGBTQ+ community make throughout sport in…...

RT @netballni: 📢 Squad Announcement 📢 Here are your Warriors!! We are delighted to have nominated the following 12 netballers to @goteamni…...